Choose the course for demo

Some text in the modal.

You are currently on a trial version of this course. To gain full access, redeem your course keycode. If you do not have a course keycode, you can purchase one here.

How Do Predator and Prey Populations Interact?

In this activity, you will explore inter-dependencies in ecosystems by examining several predator-prey relationships. 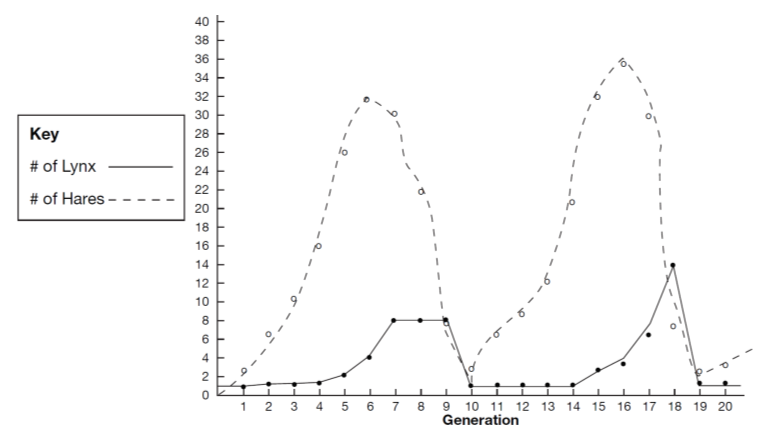 How is the situation that Video 2 describes more complex than the dynamic described in Video 1?

Describe two challenges you think might be associated with studies of predator-prey relationships in complex ecosystems.

Describe at least three other factors that may influence the lynx and hare populations.

Connect to Your World

Yellowstone National Park is a complex ecosystem with many inter-dependencies. For example, there is a complex dynamic between beavers, wolves, and elk that has been studied for many years. Prior to 1995, there was only one beaver colony in the park. After the reintroduction of grey wolves into the park the number of beaver colonies increased to nine. Why do you think the reintroduction of wolves into Yellowstone influenced the Elk population? How does the Elk population, in turn, exerted an indirect impact on the Beaver population?

Learn More by Exploring These Links

Wolves and Moose at Isle Royale

The following is a link to a card game that you can use to simulate the lynx-hare relationship:

If you would like to combine this activity with an in-school experience, try the following laboratory kit:

Creating a new account is fast and easy. First we need to know if you are a teacher or a student.